The graveyard is the richest place in the world for it is utterly filled with untapped potential.

It is unfortunate that many of us will leave this earth without coming close to fulfilling our God-given potential and purpose for a myriad of reasons – ranging from life circumstances to cultural beliefs and to fear and unbelief. While it is quite tempting and very easy to give reasons and make excuses for why we are not on the path to fulfilling our God-given potential, a closer look at our world reveals stories of people those that have overcome unimaginable odds to accomplish something wonderful in their world.  A well-known example of this is that of Joyce Meyer, a now world-renowned preacher who had to overcome protracted abuse. Another example is that of Dana Bowman, a double amputee who re-enlisted in the U.S Army and is a well-known motivation speaker.

When thinking of Joyce and Dana, we shouldn’t stop at admiration, but should ask the question ‘How did they do it?’. Two things they both did are as follows: (1) Both did not allow their circumstances to determine their identity and worth. (2) Both determinedly followed the road less traveled to its eventual end of receiving the promise.

So what makes anyone take the road less traveled? The simple answer is boldness and courage. For a believer, that boldness and courage should be rooted in our identity in Christ, His power towards us, and His unfailing love for us! It is when we have this foundation firmly established that we stop asking ourselves questions like, ‘what if I go after my dreams and fail miserably?’ and ‘What if I miss God?’ This foundation tells us that He will pick us up if we fail just like he did to Peter when he lost faith and sank. If we miss God, He will find us and correct our course. 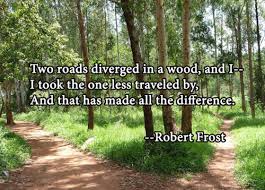 If you are considering taking a road less traveled, here are a few things you need to internalize.

God never tells us to do something without giving us the power to do it. When God commanded Moses to go back to Egypt, he gave him signs and wonder, a rod of power, and a side-kick. When Joshua began his journey, God made him a promise that no one would be able to stand-up to him. When He prompted Jesus to begin His ministry, He equipped Him with the Holy Spirit and empowered Him. When He commanded the disciples to give the bread He had broken to the 5000 men (excluding women and children), the bread never ran out in the hands of the disciples, meaning that the miracle happened in the hand of the disciples as they followed God’s commandment!

God will not tell you to go for it without giving you the supernatural ability to accomplish what He has told you to do. So do not worry about not being qualified or not having the ability.

Delay Does Not Mean Denial

Delay in life can occur due to circumstances beyond our control or our own mistakes. Consider Sarah who was unable to have a child because she was barren. What about Moses? His heart intention of delivering the Israelites was delayed 40 years because he tried to do it in his own strength (when he murdered the Egyptian). The children of Israel’s entry into the Promised Land was delayed some 40 years because they were disobedient to God.

Remembering these cases, we find that Sarah did have a child called Isaac at 90 years old, Moses did deliver the Israelites our of Egypt at 80 years old, the children of Egypt did enter Canaan – including Caleb who was 85 years old.

Thus, it neither matters that you have made mistakes nor does it matter how old you are, what matter is that you submit to God now. Remember that Jesus’ ministry spanned just 3 years, yet it remains the most powerful ministry in the history of mankind. So do not worry about having wasted too much time or being too old.

Your Disobedience Does Not Negate God’s Faithfulness Towards You

God did not take away the manna, the cloud by day, the fire by night, and the supernatural miracle of clothes and sandals not wearing our when the children of Israel disobeyed Him. God did not take away the crown from David’s head when he decided to take Bathsheba as his wife and kill her husband. God does not rip away His Holy Spirit from us when we disobey Him. No, God is faithful even in the midst of our unfaithfulness.

God is merciful towards our disobedience and extends His grace towards us that we may grow in faithfulness. So do not worry about making a mistake.

How daunting and strange it must have seemed to the children of Israel. They were used to effortlessly picking up manna for 40 years, then one day it suddenly came to an end. Though there had to be some ‘letting go’ that had to happen, it was the right thing and blessed thing to do. In the same way, we should not be surprised when old doors close when God opens the doors to that road less travelled. We should acknowledge what the old door meant but never to the point where we do not let go of the old – for the old will only lead us back into the wilderness and away from God’s best.

If a door closes suddenly, we should open our eyes to see the door that He has opened that we may walk through it. The angels are cheering your on to go for it.